DOCTOR MAURO PARRA CORDERO: «IN A LOT OF COUNTRIES PREECLAMPSIA IS THE MAIN CAUSE OF MATERNAL AND NEONATAL DEATHS» 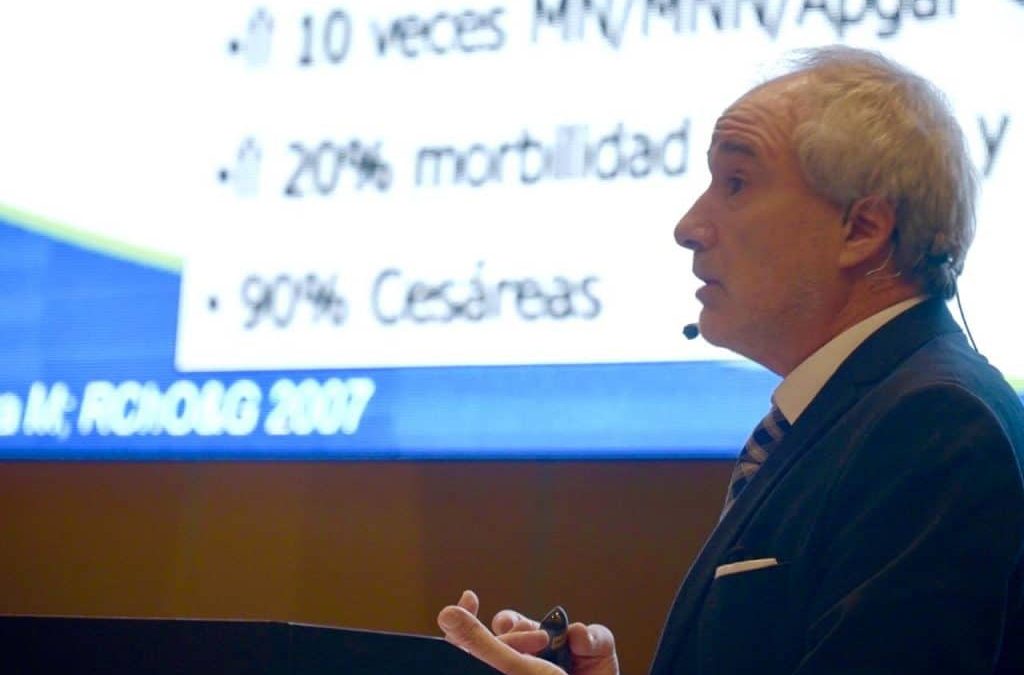 According to data from the World Health Organization (WHO), a quarter of maternal deaths in Latin America are related to hypertensive disorders during pregnancy. Among which Preeclampsia and Eclampsia stand out as the principal causes of maternal and perinatal morbidity and mortality.

On the 13thof September, the Juan Rasmuss Echecopar Foundation (FJRE) executed its First Health Event «Avoidable Maternal Deaths by Preeclampsia in Paraguay», in which Prof. Dr. Mauro Parra Cordero participated as key speaker. Prof. Dr. Mauro Parra is a specialist in Gynaecology and Obstetrics at Chile University, Doctorate in Medicine at London University in United Kingdom.

Mora than 400 health professionals attended the event. Doctor Mauro Parra addressed different topics related to Preeclampsia. From the most general topics: how to diagnose, distinguish moderate preeclampsia from severe preeclampsia and identify high risk factors associated to this disease, to the forefront techniques used to evaluate or assess the risk.

Doctor Parra pointed out that «the first measures a country should take is to evaluate how the socio-economic level can be raised. By improving these levels, many figures, such as maternal mortality or perinatal mortality also improve; as many of these figures are related to general conditions of the country. The second thing is to develop prevention strategies of certain conditions which produce higher maternal and perinatal mortality and for this reason countries must know their figures and what are the causes that produce them, and develop prevention campaigns depending on the cause».

Furthermore, the doctor added that «in many countries it is the main cause of maternal and neonatal deaths. Women who suffer this illness, are more likely to develop diseases in their post-pregnancy life known as “non-communicable”, such as chronic hypertension, heart conditions, heart attacks or cardio-vascular complications. This is a condition that not only affects women’s short-term health but also their long-term health.

According to Dr. Parra, there are risk factors associated to preeclampsia, such as obesity or being overweight, being young or old, having had the last pregnancy more than 10 years ago, twin pregnancies, those who present a chronic pathology like hypertension or an immunologic disease such as lupus, among others.

There are also risk factors associated to the formation of the pregnancy. One of the most relevant factors for the genesis of preeclampsia is how the placenta was inserted in the uterus. If it was inserted inadequately, this patient will have a higher risk of developing preeclampsia.

As Dr. Parra stated, preeclampsia is «a condition that occurs during pregnancy and is characterized by hypertension» and can be classified as moderate or severe. Another point to be considered is the moment at which the disease appears. If it develops in early stages, before 34 weeks, or after this gestational age. These two factors must be taken into account to evaluate the risk for the mother and the baby.

Regarding the symptoms of preeclampsia, as it causes hypertension, this results in headaches. It can also cause photopsia (vision of lights or sparkles) and ear buzzing. This is the classic triad of the illness, although it can also produce swelling and absence of urination.

During the Health Event there where talks regarding treatment and disease management. There were debates about clinic cases with the specialists; with the objective of learning more about how to manage preeclampsia and exchange opinions.

When assessing his participation in the Foundations Health Event, Dr. Parra highlighted «our interest resides in transference of knowledge to this society because if it is used in the context of a country which needs to reduce its maternal and perinatal indexes, all the better. Our aim of contributing with knowledge is altruistic».