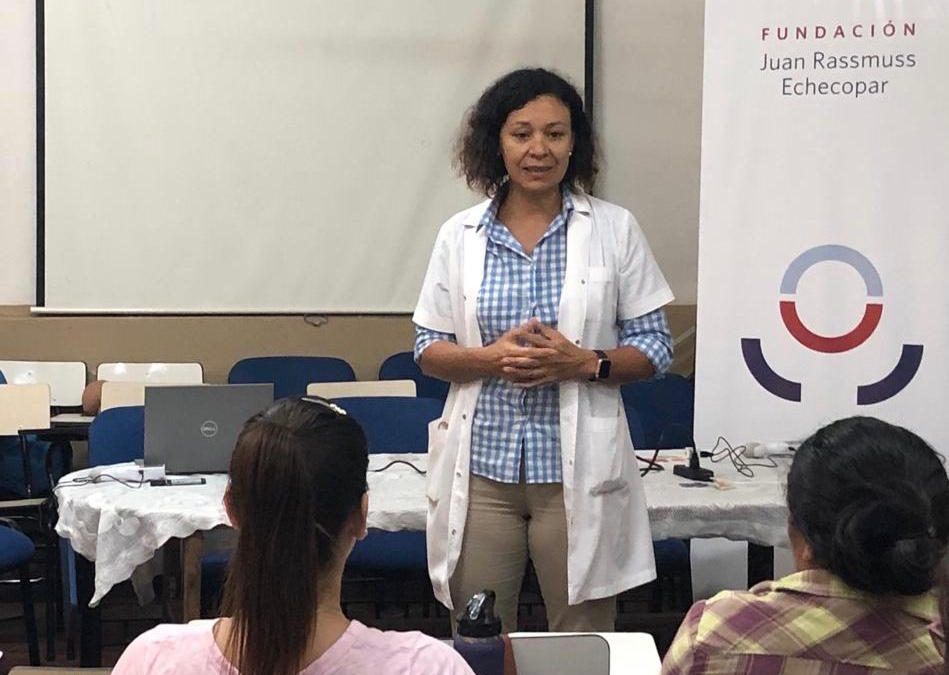 “Making early interventions to reduce maternal and fetal morbidity and mortality caused by this pathology, is the great challenge we have”, Amada Rodríguez – medical director.

The San Pablo Hospital of Asunción will soon receive the collaboration of the Juan Rassmuss Echecopar Foundation with the implementation of the Preeclampsia Project. Amada Rodríguez, medical director of the Hospital commented about the expectations:

¿How do you see the collaboration of the Juan Rassmuss Echecopar Foundation, with the arrival of the Preeclampsia project at the San Pablo Hospital?

Thanks to the Foundation, we will have the opportunity to carry out research related to this frequent pathology in the country, which is a cause of maternal and fetal morbidity and mortality. The expectation is to be able to intervene opportunely, thanks to the results, in order to reduce the maternal / fetal morbidity / mortality produced by this pathology.

¿What is the estimated data in relation to women who come to the San Pablo hospital with a high risk of developing Preeclampsia?

With regard to the data of high-risk patients, we do not have such registry, but we estimate that they would be around 25% of all our patients.

¿Do you think that with the implementation of the project we can generate awareness and reduce cases of pre-eclampsia?

We believe that all collaboration with a solid and scientific basis will generate results that raise awareness. I believe that with the opportune handling of the pathologies, complications will be highly reduced. 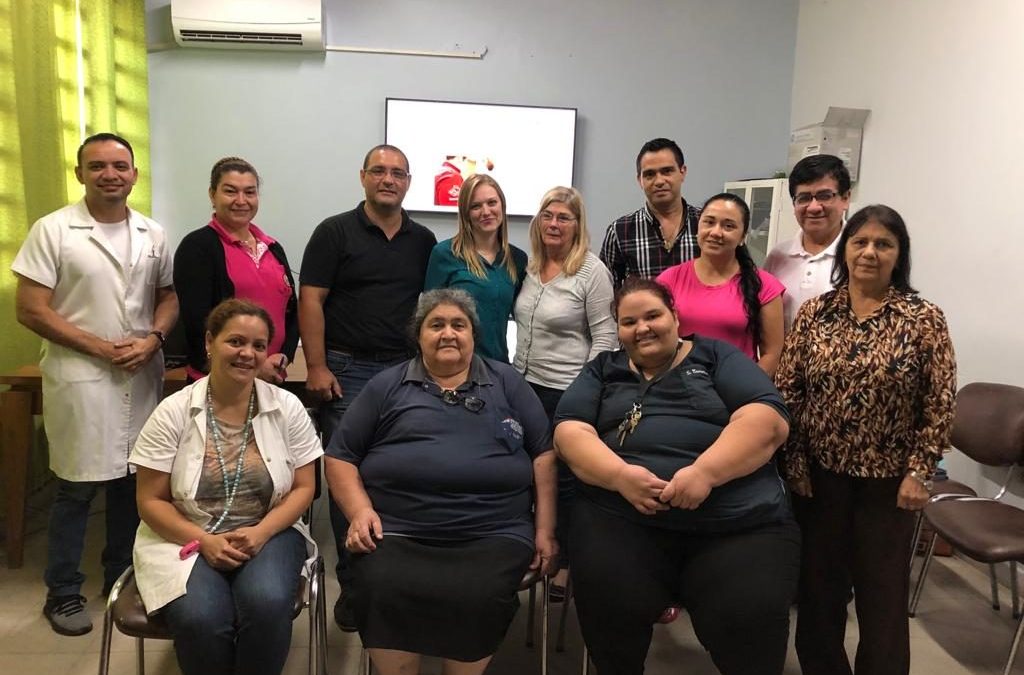 The main medical advisor of the Juan Rassmuss Foundation (FJRE), Dr. Carol Lole Harris, visited the Loma Pyta Hospital to train health professionals working in the Family Health Units (FHU) of the area. The objective of the training was to present the Preeclampsia Project that will soon be implemented in the FHU of Loma Pyta.

During the session, the program was presented and the outreach it has related to

the patients and the early detection of preeclampsia in pregnant women. The Foundation has been implementing the Preeclampsia Project for a year in Asunción and is currently present in the Hospitals of Clinics and Loma Pyta, soon also reaching the San Pablo Hospital.

The professionals appreciated the interest of the Foundation in wanting to collaborate with the community of Loma Pyta and its surroundings, they mentioned that they will happily commit to the implementation of the project, hoping it will be a success in the Family Health Units.

The meeting was attended by professionals from the Family Health Units of San Francisco, Las Colinas, Arco Iris, Viñas Cue and Perpetuo Socorro 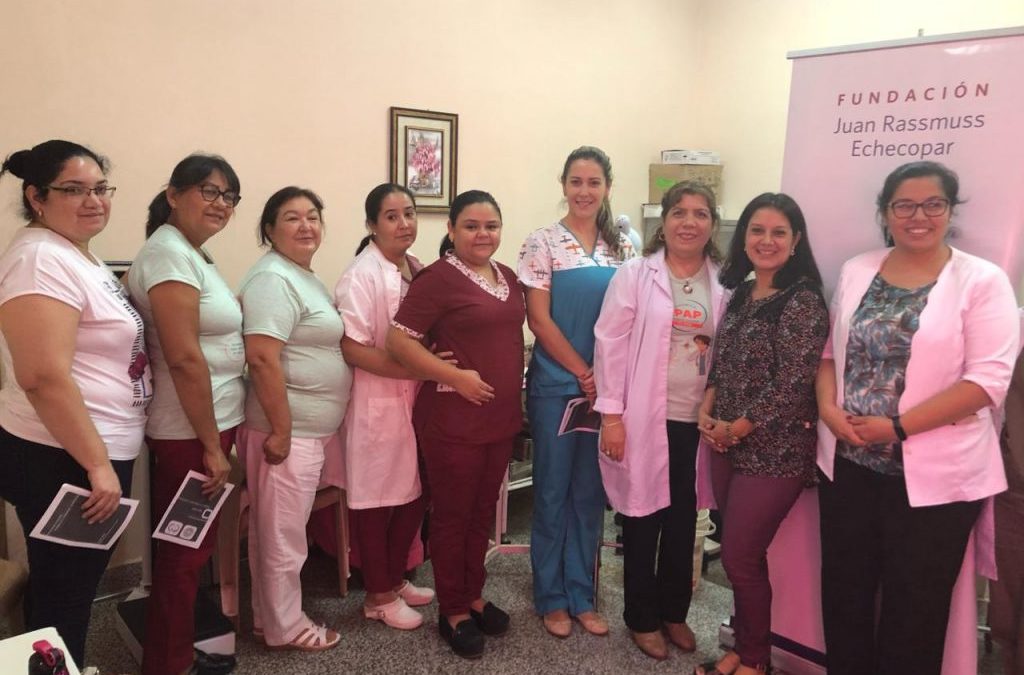 With the implementation of the project, the disease can be detected and treated quickly and free of charge

On Wednesday morning, March 27, the Chlamydia Project training session took place at the Mariano Roque Alonso District Hospital. The professionals of the gynecological service participated in the workshop led by Dr. Celia Vázquez., Medical Advisor of the Foundation. The training was developed in order to show the techniques for the study, detection and treatment of Chlamydia, which is now being implemented in the hospital of Mariano Roque Alonso. Dr. Mercedes Cárdenas Almada, head of the gynecology service was happy with the arrival of this project that will benefit the large population of women who arrive daily at the hospital. “It is very important for us to have this type of donations so as to know how many patients have the infection and thus be able to make timely and effective treatments in couples” said Dr. Cárdenas.

The Foundation collaborates with the Chlamydia project in some hospitals in Asunción and the Central Department (Loma Pyta Hospital, Calle’i San Lorenzo Hospital and Lambaré Hospital)

We tell you briefly what Chlamydia is

Chlamydia is a sexually transmitted disease (STD), which is contracted by having sex with a carrier of the disease. Chlamydia is more common among young people, so it is important that couples consult with a doctor. Chlamydia is easily treated and cured, however if the treatment is not performed correctly, the couple is exposed to serious health problems.

The symptoms of Chlamydia are:

The General Director of the Hospital, Dr. Silvia Giménez, also attended the meeting and thanked the Foundation for its presence through the implementation of this project.

Dr. Carol Lole-Harris tells us about how Preeclampsia has become one of the biggest causes of death among women and babies in Paraguay and how the Juan Rassmuss Echecopar Foundation is trying to help in this situation through one of the programs.

¿How important is working on Preeclampsia (PE) in Paraguay?

Working on Preeclampsia in Paraguay is very important because it is the main cause of maternal mortality and morbidity in the country, a situation that is very preventable.

How do you think it is possible to reduce the maternal mortality rate due to preeclampsia and increase the diagnosis of patients with pre-eclampsia in the country? How is the Foundation’s program contributing in this?

Mortality rates due to pre-eclampsia can be reduced by relatively simple but quality routine prenatal care, mainly without the need for expensive equipment or drugs. This has been achieved in many other countries. The important point is that there should be early detection of preeclampsia by regular control of blood pressure and urinalysis for all pregnant women.

The Juan Rassmuss Echecopar Foundation (FJRE) trains health professionals with regard to pre-eclampsia, blood pressure control techniques and urinalysis. In addition, it provides adequate blood pressure measuring machines, as well as test strips for urinalysis in pregnant women. These components are essential in the monitoring of pregnant women and in the detection of pre-eclampsia.

¿What are the key aspects in the detection of preeclampsia that a pregnant woman should take into account? What do you recommend in this situation?

The problem is that Preeclampsia is a silent condition. It is a multisystem disease that affects both the mother and the baby. A woman with pre-eclampsia has no symptoms until the end of the pregnancy. However, even during the first trimester of pregnancy, pre-eclampsia is already having an effect on the fetus and the well-being of the mother. The key point, which cannot be emphasized enough, is that all pregnant women should attend the hospital as soon as they are aware of their pregnancy, so that they can receive a correct evaluation and monitoring. It is important that in the first consultation pregnant women go through a Preeclampsia risk factor evaluation.

It is well documented that there are certain risk factors that make a pregnant woman more likely to develop Preeclampsia. These include factors such as the first pregnancy, or having high blood pressure in a previous pregnancy, among others. If risk factors are identified in prenatal patients in the first consultation – which should be as early as possible in pregnancy – they should receive preventive prophylaxis in the form of aspirin and calcium, until almost the end of their pregnancy. This can reduce the risk of developing Preeclampsia, and thus keep the baby healthy.

A fundamental part of the Preeclampsia Project of the FJRE is to train health professionals so that they can correctly evaluate all pregnant women in the first consultation on the preeclampsia risk factors, and to administer aspirin and calcium when needed. In addition, health professionals should encourage patients to attend their routine check-ups during pregnancy.

¿What have the main achievements of the Preeclampsia program been during this year of work in Paraguay?

We are working on the Preeclampsia Project very satisfactorily in two hospitals with a large influx of patients: The Clínicas Hospital of the National University of Asunción and the Loma Pyta Hospital of the Ministry of Health network. Under the collaboration agreement that we have signed with the Ministry, during 2019 we plan to expand the scope to 2 more Hospitals, and strengthen the Family Health Units that surround the Hospitals where the Project is implemented.

In addition to coverage, the Rassmuss Foundation has worked throughout 2018 to increase knowledge about pre-eclampsia among health professionals through continuous training. Additionally, we are working intensively on the development of awareness material about this condition, aimed at pregnant women.

¿In a pregnancy context, what are those symptoms to which the patient must always be attentive?

Patients should be aware that feeling good during pregnancy does not necessarily mean they are well. As we have mentioned, this is a silent disease, it is like a volcano, which for the most part seems to be inactive, but underneath the pressure to erupt is being built, with no visible signs. The signs can only be detected by a specialized control over time. Likewise, it is important to attend all prenatal appointments and, above all, to attend the first prenatal appointment early on in the pregnancy.

Women should be aware that preeclampsia can cause a variety of problems, such as strokes, seizures, maternal death and premature births, if left untreated. Early diagnosis and treatment can prevent these problems. Pregnant women should be aware of the symptoms of preeclampsia and that it can occur in any pregnancy. Although those who have risk factors are more likely to develop it, all pregnant women are susceptible to Preeclampsia.