“WE CONTINUE TO HAVE MATERNAL DEATHS FOR PREVENTABLE CAUSES”

Preeclampsia World Day was celebrated on May 22. During an awareness-raising activity, which took place in the Ministry of Public Health with the support of the Juan Rassmuss Echecopar Foundation; Dr. Diego Núñez made a presentation about preeclampsia in the Paraguayan context. In the following interview we talk with him about the topic discussed on that occasion.

We heard in your speech that Preeclampsia is currently the first cause of maternal death in Paraguay. Tell us more about this, doctor, and your vision on how to improve this situation

When talking about pathologies, since the year 2017, the complications from preeclampsia occupy the first place in terms of mortality and also morbidity among the women of our country. That is worrisome for two reasons; first, because complications are often preventable and also because we currently have well-established protocols within the Ministry of Health for the management of pre-eclampsia, and yet it seems that the management is not yet applied correctly. There are tools that we provide to professionals throughout the health system, such as guidelines, regulations and protocols that we elaborate in matters of health for the public and private sector, but we must still insist on doing the correct things.

¿What data do you have regarding maternal mortality in Paraguay?

Making a comparative analysis between the data from 2018, and the 2019 data up to the month of May, there has been an increase in maternal deaths, mainly from the complications due to preeclampsia, postpartum hemorrhage, asepsis and abortions.

¿What actions is the Ministry of Health taking regarding this issue?

In order to do prevention, we need to raise people’s awareness on the importance of early prenatal control. Then, the health professional would simply need to follow the established protocols. Last year we published a manual of obstetric pathologies, which is a step-by-step guide for the professional who must perform a prenatal consultation, which is also a way to reduce the rates of preeclampsia. There are also guidelines for preeclampsia and the diagnosis that cannot be avoided any longer. In those cases we apply the red code, which also teaches professionals the steps that they should follow, and how to act in each case. In addition, there is a committee to monitor maternal and neonatal mortality, where all cases of complications and maternal deaths are studied, performing an intervention in each hospital center where the patient passed to study the background, the mistake committed and work on how to improve.

¿In your opinion, what role does the collaboration of the Juan Rassmuss Echecopar Foundation have in the prevention of this disease?

The Foundation helps us a lot with the promotion. Before, Preeclampsia was a very poorly known issue, but now there is a better awareness. The initiative implemented by the Foundation foresees everything that should be done in all hospitals: counseling, the evaluation of risk factors, adequate blood pressure measurements. It is also very positive to provide high-risk pregnant women with manual blood pressure taking devices, which help a lot thanks to the easy understanding for patients of the “traffic light” system.

He is a specialist in Gynecology and Obstetrics, graduated from the Faculty of Medical Sciences of the National University of Asunción. He works as a doctor on duty at the Hospital of Clinics, and currently holds a position in the Ministry of Public Health, serving as head of the Department of Integral Health for Men and Women, under the Directorate of Sexual and Reproductive Health.

As a member of the technical team of the Ministry of Health, he conducts training sessions nationwide on all issues related to Sexual and Reproductive Health, other issues such as obstetric emergencies, red code, family planning and is now initiating with his team a new project “Prenatal”, focusing on the difficulties and errors that are found in the service of the different hospital centers. 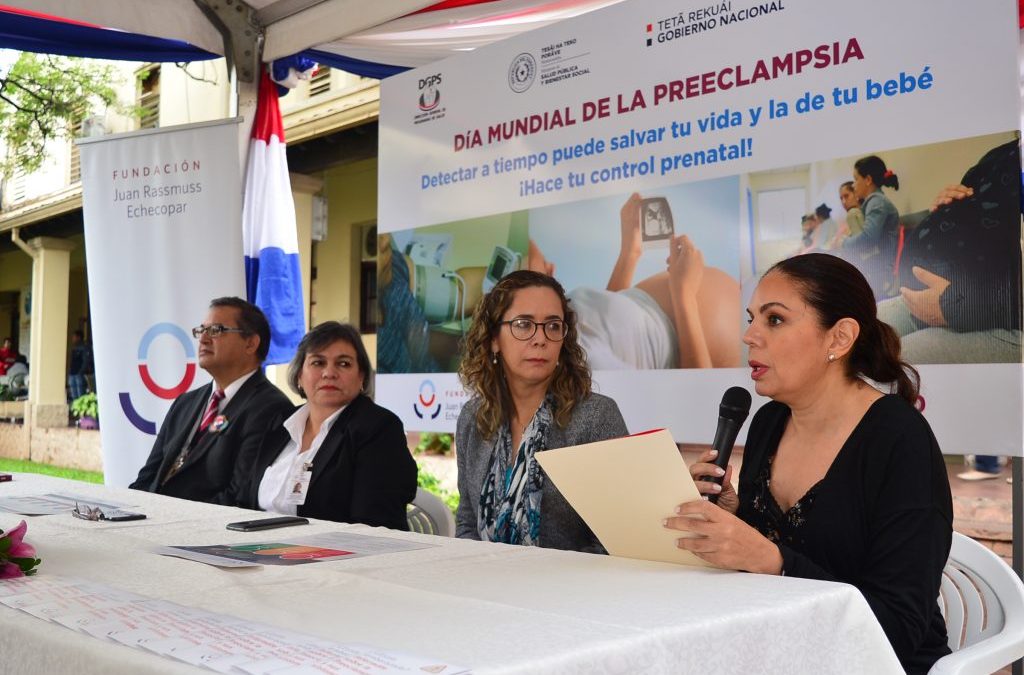 On the 22 of May, a World Preeclampsia Day event took place at the Ministry of Health in which the severity of this illness was emphasized, making clear that it is the main cause of maternal death.

According to data from the Ministry of Public Health and Social Welfare, Preeclampsia is one of the most common severe complications during pregnancy (2017). At least 23% of maternal deaths in Paraguay are caused by this condition.

On the morning of the 22ndof May, in commemoration of World Preeclampsia Day, an activity took place at the Ministry of Health with the objective of raising awareness about Preeclampsia as a cause of maternal death as well as the steps that should be taken for its prevention.

According to doctor Diego Núñez, head of Comprehensive Health for Men and Women department at the Ministry of Public Health and Social Welfare, Preeclampsia is currently the major cause of maternal death above post-partum hemorrhage, above infections and even above abortions which increases among adolescents. “22% of our delivery’s correspond to adolescents, and in this sector, statistics are much higher, also the indigenous population is very vulnerable. In both cases women die mainly due to the complications of Preeclampsia and Eclampsia, which have been constant in the past three years”, said Diego Núñez.

Most deaths by Preeclampsia are avoidable, the Ministry of Health’s recommendation is to follow the protocol for prenatal care, which the Ministry develops through health programs management. Correct medical studies, effective prenatal controls, alongside early detection of Preeclampsia is the key to improving maternal perinatal results.

General Manager of the Juan Rassmuss Foundation, Patricia Abed, stated that positive results can be obtained without expensive diagnostic equipment. “This is the most significative part of our initiative; raising awareness among health professionals, patients and enhancing visibility about the severity of this pathology.

The participants on this event where Patricia Veiluva, Health Programs director and Jorge Sosa, Sexual and Reproductive Health director of the Ministry of Public Health and Social Welfare. Doctor Diego Núñez – head of Comprehensive Health for Men and Women department at the Ministry of Public Health. Lawyer Patricia Abed, in representation of the Juan Rassmuss Foundation. 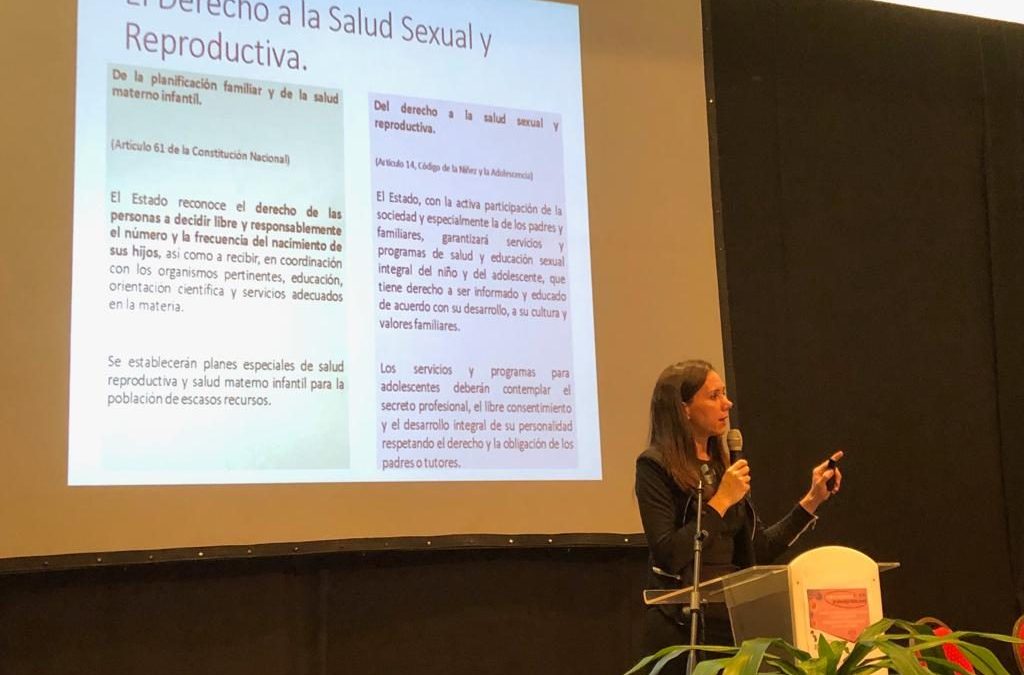 Asunción was the venue for the XVI Latin American Congress of Infants and Adolescents Obstetrics and Gynecology.

From the 29thof May to the 1stof June, the XVI Congress Obstetrics and Gynaecology of Childhood and Adolescents took place in the city of Asunción, and was organized by the

Professionals from the hole of Latin America and other continents participated in the event, creating spaces of academic excellency to contribute to improving the care level of health professionals; which will be beneficial for all children and adolescents in a comprehensive manner and with a special focus on sexual and reproductive health.

Juan Rassmuss Echecopar Foundation celebrates and congratulates the hard work health professionals from Ñagareko have put in to participate in an event which brought key note speeches. Part of our staff from the Juan Rassmuss Foundation also participated in some of the Congress plenaries, such as “Legal aspects of adolescent consultation”, dissertation by the lawyer Claudia Sanabria, who emphasized adolescents right to sexual and reproductive health in Paraguay and the juridical clarity on this issue within society.