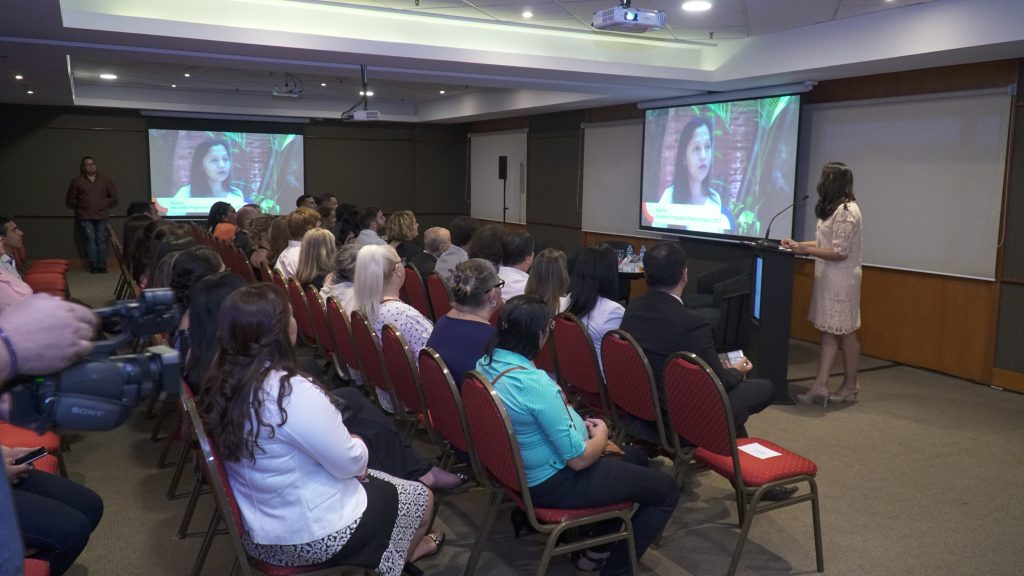 Last December, Juan Rassmuss Echecopar Foundation celebrated a successful 2018, facing more challenges in the effort of supporting the improvement of sexual and reproductive health in Paraguay. The commitment to the country was ratified with the signiture of the framework agreement between the Foundation and the Ministry of Public Health and Social Welfare, which will materialize in the coming years in actions to promote comprehensive sexual and reproductive health for adolescents and decrease the number of deaths by preeclampsia.

The celebration was held at the Sheraton Hotel in Asunción, with the presence of health professionals involved in the Foundation programs, general directors of the Ministry of Health, as well as other special guests.
Joanne Avery, president of the Foundation, said that by 2019 the plan is to double the effort in terms of coverage, with four care centers implementing the preeclampsia project, and at least two Ñangareko projects, with the aim of extending coverage to more people and producing positive impacts.

ESPACIO ÑANGAREKO CELEBRATES ONE YEAR AT THE HOSPITAL DE CLINICAS

The “Espacio Ñangareko”, a differentiated clinic for adolescents, completed last December 11th, one year of functioning at the Hospital de Clínicas, in the city of San Lorenzo.

The health professionals working in Ñangareko, surprised the adolescents who were in their gynecological and prenatal consultations, distributing presents in name of the Foundation, in celebration of the first anniversary. The young patients were happy and appreciated the gifts, which included a cradle that was raffled among those present.

Dr. Celia Vázquez, Specialist in Child-Youth Gynecology, and Medical Coordinator of Ñangareko, said that during the first operative year, more than 1,800 patients were seen, more than 558 gynecological attentions were performed and more than 1,240 girls visited for prenatal care. By 2019, the Foundation plans to expand the Ñangareko model to other centers within the Ministry of Health network.

Expanding the collaboration of the Juan Rassmuss Foundation to the Ministry of Health network, in October 2018 the project for detection, prevention and treatment of preeclampsia officially started in Loma Pyta Hospital.

The health professionals involved in the project were trained by Dr. Carol Lole Harris, main medical advisor of the Foundation.

Dr. Carlos Ayala, medical director of Loma Pyta Hospital, said that since the start of the preeclampsia project, they have implemented the project in 100% of the patients who come to their first prenatal visit, “in this way we can detect and timely treat this pathology of pregnancy, “he said.

It is estimated that to date around 840 people have been seen in this service.

In December 2018, the Foundation received Dr. Anne Gardner for the second time, a psychologist specializing in adolescent care, who visited us from Oxford, United Kingdom. Dr. Anne conducted training workshops on communication skills with adolescent patients, aimed at residents and professionals involved in the existing Ñangareko, and potential new partners.

The training spaces were carried out in the Hospital de Clínicas and workshops and visits to the Loma Pyta and San Lorenzo Hospital were also carried out. In a brief interview she commented that her experience in the country was positive, highlighting the good level of the professionals, “they had more advanced knowledge in this than I expected, I had a good base to work with, the groups contributed a lot to the workshop,” she said.

According to the expert, it was key that doctors recognize that working with adolescents is a very special area and admitted that it is not the same as providing services to adults. “You do not only need different equipment or a better room, it’s looking at the needs of adolescents and finding a way to communicate with them, this can make the difference between them coming and returning to the service or coming once and not coming back, that’s really important.”

Dr. Gardner highlighted how surprised she was after her visit due to the commitment of the Paraguayan professionals, “they work from the heart, they try to do the best they can in very difficult clinical situations”.